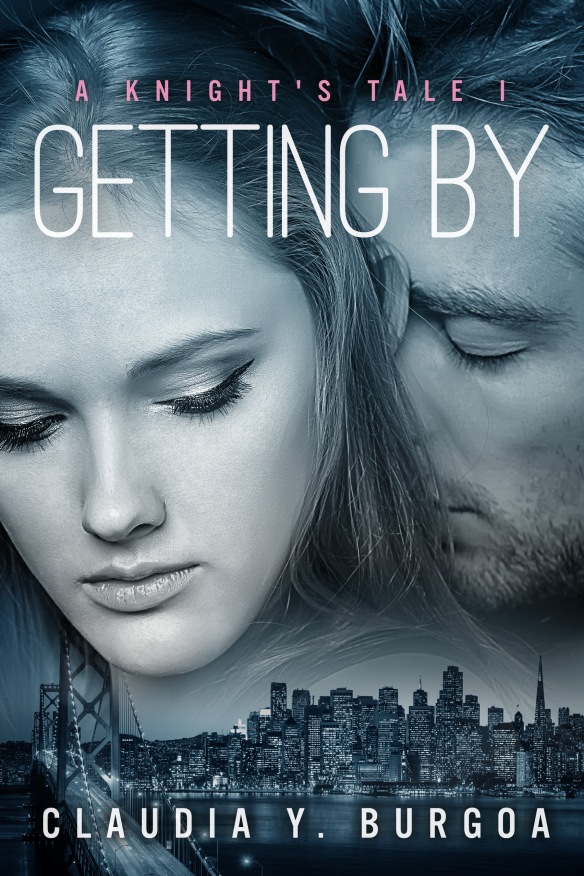 Getting By (A Knight’s Tale I) by Claudia Y. Burgoa is a new-adult contemporary romance novel, published February 18, 2014.

When Emma Anderson arrived at San Francisco International Airport, she regretted accepting the distinction of being the maid of honor to Gaby’s—her childhood friend—wedding. It had been years since the last time she set foot in Menlo Park, where her parents had been killed. The rug where she had been shoving her feelings since that day looked bumpier than a camel’s hump. Who could blame her; if she hadn’t been selfish they’d still be around. Ever since that fateful day, Emma has been perfecting the knack of Getting By.

Cade’s wedding in Menlo Park—a city close to San Francisco—might be the perfect place for Jake Knight to shake the memories of his ex, Emma Anderson for good. Single, available women galore for an entire week was the perfect medication, one he intended to take three times a day for an entire week to return to his player days. It was a plan the former spy thought flawless until he came face to face with the maid of honor. Jake’s perfect retreat turns into a flight, fight or hide week of celebrations.

This is the first book in the 4 book series. The second book will be released later this year.

“You sure about being here?” She nodded, answering my question. Then I slipped one of the migraine pills in her hand and opened a bottle of water. I noticed that Mom and Dad had walked over to Gaby, who waited for them on the corner of the street. After gulping her medicine and water, she handed the bottle over to me. “Text me if you need me to pick you up earlier, Pretty Girl.” She nodded again and I kissed her temples. “Liam, can you walk her to the shop, please?”

Mitch couldn’t hold his tongue any longer, and spoke up, saying, “What was that about?” I glared at him. “Mom being too quiet is scary, right? You want to throw her at her own game? Am I next to be extremely nice with Emma, as if she was my girl?” I grinned, he got me. “Pointers for it to work. Try to change your concerned look, stop drooling and perhaps Mom might believe you.” I narrowed my eyes. “Yeah, it was that obvious since we hit the hotel restaurant at eight this morning, Jay. You were too couple-like. Let’s run you through the breakfast highlights.

“You spotted the girl and ran to her whispering in her ear, giving her a stupid smile I’ve never seen you wear before.” I smirked, remembering the fork, and snorted. Ignoring me, he continued, “At breakfast you two were sitting too close for comfort. Not even Mom and Dad were that close. The best part wasn’t the medicine errand you ran for her. No.” No? I put a hand on the back of my neck and continued listening to the play by play that made me look like a moron in love. “The freaky part, where everyone dropped their jaw at the table, was when Emma reached toward your plate and grabbed strips of your bacon.” I shrugged, what was wrong with it? “Not once, but several times. No one is allowed to touch your food, Jake. Ever since we were little, you hated it. Yet, Emma touched your food, and while she was doing it, you were a millimeter from kissing her. You two are too comfortable with each other, and the daunting part, Jake, is that the two of you fit so well that you don’t realize how wrong everything looked for the ones that don’t know about your relationship.”

“Or for the ones that know you two broke up,” Liam added. I didn’t notice when he came back. “The parental units are suspicious, Jake. Come clean and put some space between you and Emma before Mom chooses the wedding location and makes Dad buy the two of you a house next door to theirs.”

“Did you have to deal with the TMI all the time, Li?” Mitch shivered after Liam nodded with a blank stare. “I never checked to see if the girl I slept with used the pill or not. Add to that the hot factor that she carries condoms in her magic bag.”

“It’s different when you’re with a girl for more than one n—” I rubbed the back of my neck. “Can we not talk about my girl?” I gulped after uttering the last two words and began to think about some form of rehabilitation to move on.

Enter to win a kindle version of Getting By!!

About the Author ~ Claudia Burgoa

Claudia lives in Colorado with her family and three dogs. While managing life, she works as a CFO at a small IT Company. She’s a dreamer who enjoys music, laughter and a good story. Claudia writes romance, sci-fi, and fantasy. She has published two novels: Where Life Takes You and Getting By. Claudia is currently working on Standing By, the second book in the Knight series. For 2014, Claudia plans to released three, perhaps four novels.

1 thought on “Getting By ~ Promo & Giveaway”