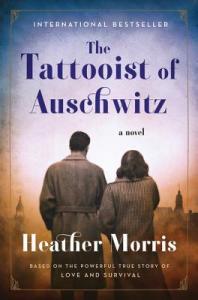 Title: The Tattooist of Auschwitz
Series: The Tattooist of Auschwitz #1
Author: Heather Morris
Release Date: Sept. 4, 2018
Genres: Historical Fiction/WWII/Holocaust
Blurb: In April 1942, Lale Sokolov, a Slovakian Jew, is forcibly transported to the concentration camps at Auschwitz-Birkenau. When his captors discover that he speaks several languages, he is put to work as a Tätowierer (the German word for tattooist), tasked with permanently marking his fellow prisoners.

Imprisoned for more than two and a half years, Lale witnesses horrific atrocities and barbarism—but also incredible acts of bravery and compassion. Risking his own life, he uses his privileged position to exchange jewels and money from murdered Jews for food to keep his fellow prisoners alive.

One day in July 1942, Lale, prisoner 32407, comforts a trembling young woman waiting in line to have the number 34902 tattooed onto her arm. Her name is Gita, and in that first encounter, Lale vows to somehow survive the camp and marry her.

A vivid, harrowing, and ultimately hopeful re-creation of Lale Sokolov’s experiences as the man who tattooed the arms of thousands of prisoners with what would become one of the most potent symbols of the Holocaust, The Tattooist of Auschwitz is also a testament to the endurance of love and humanity under the darkest possible conditions.

I was a little nervous going into this book. I knew that it was dealing with some heavy subject matter. I just wasn’t sure of the feel of the book. Would it leave me feeling anxious and depressed? And right now I haven’t been dealing well with stuff that comes off as too heavy. Fortunately, I was able to handle this book just fine. There were a few moments that really felt like a sucker punch to the stomach, but there wasn’t an overall feeling of complete despair. I’m fairly certain that was due to Lale’s character.

Lale is one of the most level-headed individuals with one of the absolute best attitudes. He has a couple moments when things get especially bad that he loses his cool, but for the most part he remains upbeat and refuses to give up or let Gita accept anything that doesn’t involve them being together one day outside of Auschwitz.

This was certainly the first time that I’ve read a story where a couple meets and falls in love in a concentration camp. And that fact that it really happened makes it that much more special. But while their story and what they’re hoping for afterwards is the point, it doesn’t feel like the overall focus of the story. The focal point for me was strictly what life was like inside the camp for Lale. It offered a unique perspective with him being the tattooist. You get a full understanding from start to finish of his life in the camp. Lale works at getting himself in a better position, and then he uses that position to help others. There are few highs and many lows along the way. But Lale doesn’t give up.

There’s such a great message in this story for how our attitude can greatly affect our positions, how we view those positions, and what we can accomplish in even the worst conditions. I definitely recommend this one for historical fiction fans, especially if you enjoy WWII/Holocaust stories. 4.5 Stars!

*NOTE* I highly recommend reading the afterword, too!

I am finishing up the last little bit of Devil in Spring today, and then I’ll start listening to Good Omens. I am excited for my first Neil Gaiman experience!!

10 thoughts on “The Tattooist of Auschwitz ~ Review”