Happy Friday!! I hope you all have a fabulous start to your weekend!

Here are some of my TBR adds this week. The title links will take you to Goodreads, and I’m also linking up to other bloggers/booktubers, etc. whose reviews, comments, or posts encouraged me to give these a try! Sharing some blogger love!! If you’d like to join in, be sure to leave a link in the comments!

When aspiring music journalist Ren Kingston takes a job nannying for a wealthy family on the exclusive island of Nantucket, playground for Boston’s elite, she’s hoping for a low-key summer reading books and blogging about bands. Boys are firmly off the agenda.

What she doesn’t count on is falling in with a bunch of party-loving private school kids who are hiding some dark secrets, falling (possibly) in love with the local bad boy, and falling out with a dangerous serial killer…

When Ros steps off a plane after four years away she’s in need of a job, a flat and a phone that actually works. And, possibly, her old life back. Because everyone at home has moved on, her parents have reignited their sex life, she’s sleeping in a converted shed and she’s got a bad case of nostalgia for the way things were.

Then her new phone begins to ping with messages from people she thought were deleted for good. Including one number she knows off by heart: her ex’s. 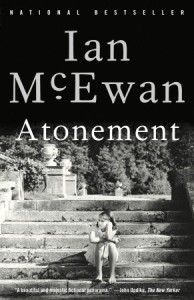 Ian McEwan’s symphonic novel of love and war, childhood and class, guilt and forgiveness provides all the satisfaction of a brilliant narrative and the provocation we have come to expect from this master of English prose.

On a hot summer day in 1935, thirteen-year-old Briony Tallis witnesses the flirtation between her older sister, Cecilia, and Robbie Turner, the son of a servant. But Briony’s incomplete grasp of adult motives and her precocious imagination bring about a crime that will change all their lives, a crime whose repercussions Atonement follows through the chaos and carnage of World War II and into the close of the twentieth century.

A masterful true crime account of the Golden State Killer—the elusive serial rapist turned murderer who terrorized California for over a decade—from Michelle McNamara, the gifted journalist who died tragically while investigating the case.

“You’ll be silent forever, and I’ll be gone in the dark.”

For more than ten years, a mysterious and violent predator committed fifty sexual assaults in Northern California before moving south, where he perpetrated ten sadistic murders. Then he disappeared, eluding capture by multiple police forces and some of the best detectives in the area.

Three decades later, Michelle McNamara, a true crime journalist who created the popular website TrueCrimeDiary.com, was determined to find the violent psychopath she called “the Golden State Killer.” Michelle pored over police reports, interviewed victims, and embedded herself in the online communities that were as obsessed with the case as she was.

At the time of the crimes, the Golden State Killer was between the ages of eighteen and thirty, Caucasian, and athletic—capable of vaulting tall fences. He always wore a mask. After choosing a victim—he favored suburban couples—he often entered their home when no one was there, studying family pictures, mastering the layout. He attacked while they slept, using a flashlight to awaken and blind them. Though they could not recognize him, his victims recalled his voice: a guttural whisper through clenched teeth, abrupt and threatening.

Ten-year-old Evie has a talent. A SUPERTALENT. Evie can TALK to animals and HEAR their thoughts. Pretty amazing, isn’t it? One day at school, Evie sets Kahlo the rabbit free from her too-small cage. Evie knows she’s done A Good Thing . . . but it lands her in BIG trouble. Evie’s dad and Granny Flora say her talent is a curse; she must never use it again. Until a year later pets on her street – including Lady Gaga the cat and a hamster named Cheryl – start disappearing. Evie is determined to find them. But it’s dangerous for her to help. Because the villain has a talent of their own, and only wants to use it for evil . . . Can Evie save the pets before it’s too late, even if it means DARING TO BE HERSELF?

While his friends prepare to head off to university, Robin is looking at a pile of rejection letters from drama schools up and down the country, and facing a future without the people he loves the most. Everything seems like it’s ending, and Robin is scrabbling to find his feet.

Unsure about what to do next and whether he has the talent to follow his dreams, he and his best friends go and drown their sorrows at a local drag show, where Robin realises there might be a different, more sequinned path for him . . .

With a mother who won’t stop talking, a boyfriend who won’t acknowledge him and a best friend who is dying to cover him in glitter make up, there’s only one thing for Robin to do: bring it to the runway.

In the Raverran Empire, magic is scarce and those born with power are strictly controlled — taken as children and conscripted into the Falcon Army.

Zaira has lived her life on the streets to avoid this fate, hiding her mage-mark and thieving to survive. But hers is a rare and dangerous magic, one that threatens the entire empire.

Lady Amalia Cornaro was never meant to be a Falconer. Heiress and scholar, she was born into a treacherous world of political machinations. But fate has bound the heir and the mage.

War looms on the horizon. A single spark could turn their city into a pyre.

Maccus Fury, a fallen angel, is trying hard to keep his sanity. Seems being an assassin might be catching up with him. Now, Heaven, or Hell, has sent a beautiful assassin to kill him. Lovely. She’s pretending to seduce him, and he’s okay with that. She’s smart and snarky-but she has no idea what she’s walked into. And he’s more than peeved that they only sent one person. They’re going to need an army if they want him dead.

Morrigan Quill is one of Hell’s bounty hunters. She sold her soul to keep her sister safe, and now she’s working off her contract by catching bad guys and dragging them back to hell. When Lucifer makes her a new offer–that’s definitely too good to be true-she can’t say no. All she has to do is kill a powerful and crazy-hot fallen angel, who will totally kick her ass in battle.

Olivia Dade bursts onto the scene in this delightfully fun romantic comedy set in the world of fanfiction, in which a devoted fan goes on an unexpected date with her celebrity crush, who’s secretly posting fanfiction of his own.

Marcus Caster-Rupp has a secret. While the world knows him as Aeneas, the star of the biggest show on TV, Gods of the Gates, he’s known to fanfiction readers as Book!AeneasWouldNever, an anonymous and popular poster.  Marcus is able to get out his own frustrations with his character through his stories, especially the ones that feature the internet’s favorite couple to ship, Aeneas and Lavinia. But if anyone ever found out about his online persona, he’d be fired. Immediately.

April Whittier has secrets of her own. A hardcore Lavinia fan, she’s hidden her fanfiction and cosplay hobby from her “real life” for years—but not anymore. When she decides to post her latest Lavinia creation on Twitter, her photo goes viral. Trolls and supporters alike are commenting on her plus-size take, but when Marcus, one half of her OTP, sees her pic and asks her out on a date to spite her critics, she realizes life is really stranger than fanfiction.

Even though their first date is a disaster, Marcus quickly realizes that he wants much more from April than a one-time publicity stunt. And when he discovers she’s actually Unapologetic Lavinia Stan, his closest fandom friend, he has one more huge secret to hide from her.

With love and Marcus’s career on the line, can the two of them stop hiding once and for all, or will a match made in fandom end up prematurely cancelled?

Everyone has secrets. They know yours…

In the 21st century information is king. But computers can be hacked, files can be broken into. So a unique government initiative has been borne. Five ordinary people have been selected to become the latest weapon in thwarting cyber terrorism. A revolutionary medical procedure has turned them into the ultimate secret keepers – the country’s most secretive information has been taken offline and turned into genetic code implanted inside their heads.

Together, the five know every secret – the truth behind every Government lie, conspiracy theory and cover up. Only somebody has discovered who the secret keepers are. And one by one, they are being hunted down…

What books did you add to your TBR this week???? I think it’s safe to say that I’ll never hit the bottom of my TBR. I usually add more to the TBR than I read each week.