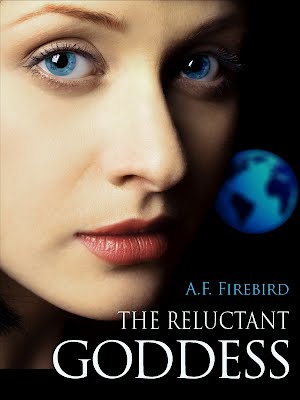 Ellena Ripley is a bookshop owner from a rural town in the south of England – or so she thinks. But lately, she has a growing sense that life is not as it seems. At night, she dreams of a serene man who appears to be trying to tell her something; In the day, she can’t shake a feeling of expectation. But of what?

Meanwhile Hector, servant of LIFE and the man from Ellena’s dreams, has a dilemma. How do you tell someone they are a goddess? His previous attempts have met with disaster so he must be cautious, particularly when his new trainee, Boudica, formerly Queen of the Iceni tries to help. The question is can they succeed before it is too late?

By now she could see her shop in the distance, nestled between the greengrocers and the gift shop and opposite the bakery, which was already doing a brisk trade. She could smell fresh bread and rich coffee before she reached the top of the high street.

Her book shop was an old fashioned wood and glass style building that reminded her of the Old Curiosity Shop from the Dickens novel. Once inside, the expanse of wooden shelves and sloping wooden floors gave the impression of a large eighteenth-century sailing ship rather than a shop. The wooden carved railings around the counter looked like a bridge, minus the steering wheel. While the ridiculously warped floorboards seemed to undulate as she walked across them, so much so that sometimes she felt like the shop was rolling on the high seas, not sitting in Wootton Bourne High Street. Some days when she traversed the room between the Romance and Philosophy sections, she imagine herself an adventurer standing at the bow of her great vessel, a warm breeze blowing her hair gently, the aroma from uncharted, blossom-covered tropical islands filling her senses. But when the image faded she would find herself again, not an adventurer on the high seas but a middle aged woman standing on a sloping floor.

Ellena unlocked the shop door and pushed it open, the door chimes jangling as she stepped over the pile of post waiting for her. She picked up the letters and placed them on the desk behind the checkout. Hector padded dutifully off to the kitchen to settle down in his basket while she flicked through the pile of mail absentmindedly. A pink sheet of paper caught her eye. She laughed. That’s me all over – print anything on pink paper and it has my attention…I am such a girl sometimes! But she read it anyway.

BECOME THE AUTHOR OF YOUR OWN LIFE was the big heading. Below it was the smiling face of a woman who presumably was the author of her own life. Ellena crumpled up the paper and threw it in the bin.

A.F. Firebird author of “The Reluctant Goddess” talks about her new novel and metaphysical fiction

AFF: It is a form of speculative fiction which explores ideas prevalent in metaphysics through the medium of story and characters. This type of fiction strips away religious rhetoric and new age language, so that the reader can contemplate the ideas presented in a simpler and hopefully more accessible way.

Q: Give me an example of the type of ideas explored in the book.

AFF: Firstly, the story is written within the context of a benevolent conscious universe, where the inanimate and animate alike work to help Ellena. The books in the shop, that she owns, all have something to tell her if only she could hear them. Her pets, a dog and a cat, are her spirit guides offering gentle, loving encouragement. Through the eyes of the characters we see our planet and the universe from a perspective.

The second main theme, is the idea that the greatest work a person can do is to live authentically. To discover who and what they really are. The main character, Ellena has lived full of the common distractions of life. By the time she reaches her late forties she still has not discovered her true self or a purpose which gives her life meaning. Throughout the novel we follow her journey as she is assisted by a conscious benevolent universe, to fully realise her identity.

Q: The Reluctant Goddess takes a non traditional approach to the idea of a goddess. Explain your take on what it means to be a goddess.

AFF: My aim has been to merge old ideas with new. Ellena is a reincarnation of Quan Yin, Goddess of compassion, who, rather than take up buddhahood, chose to stay on earth to help all humans reach enlightenment. Instead of showing the goddess as super human, the book explores the effect of fully realising the virtue of compassion in the world. And so the idea of a goddess being someone who lives their virtues or values whatever they might be.

Q: Now that The Reluctant Goddess is finished what next.

AFF: I want to continue working on metaphysical fiction. The next book continues to delve into the role of compassion in human evolution. I believe, as so many others before me, that fiction is a great way to open discussion and contemplation of ideas, so I am looking forward to feedback from readers.

A.F. Firebird is the alter ego of a sociologist/psychologist turned web developer from the UK. While A.F. Firebird has worked in several fields her primary focus is the exploration of six virtues: appreciation, forgiveness, compassion, humility, understanding and valour. Her first novel, The Reluctant Goddess, numerous short stories and children’s books, all investigate aspects of these virtues.