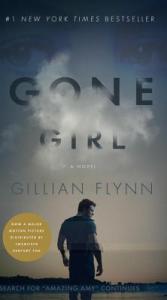 On a warm summer morning in North Carthage, Missouri, it is Nick and Amy Dunne’s fifth wedding anniversary. Presents are being wrapped and reservations are being made when Nick’s clever and beautiful wife disappears from their rented McMansion on the Mississippi River. Husband-of-the-Year Nick isn’t doing himself any favors with cringe-worthy daydreams about the slope and shape of his wife’s head, but passages from Amy’s diary reveal the alpha-girl perfectionist could have put anyone dangerously on edge. Under mounting pressure from the police and the media–as well as Amy’s fiercely doting parents–the town golden boy parades an endless series of lies, deceits, and inappropriate behavior. Nick is oddly evasive, and he’s definitely bitter–but is he really a killer?
As the cops close in, every couple in town is soon wondering how well they know the one that they love. With his twin sister, Margo, at his side, Nick stands by his innocence. Trouble is, if Nick didn’t do it, where is that beautiful wife? And what was in that silvery gift box hidden in the back of her bedroom closet?

So, I have to confess that I was a little slow at getting into this one. However, I read it alongside a group of friends, and a couple of them devoured the book from page 1. I think it’s just a matter of personal preference. I want a hero/heroine. I want to connect with someone. This isn’t one of those books. But, if you’re a lover of “who done it” books, and you don’t need to feel faith in anyone, then this will probably be your book!

It is one giant mystery. I will say that it is highly probable that you will figure out who did it, too. But, it’s still not predictable. Even if you figure it out, you won’t have figured out the whole scenario, and you’ll still be impressed. I was, and I didn’t even really “like” the book. I can respect the writing and the story, though. I have to admit that even though I didn’t like the characters (because of their character, not lack of development), I still found myself at times flipping quickly through the pages to figure something out.

Wrapping this up, if you NEED hearts and flowers, then this isn’t for you. If you love a good crime mystery, then I highly suggest it! Would I read another Gillian Flynn? It’s certainly possible.

The Sunday Post is a weekly meme hosted by Kimba @

~this meme was inspired in part by ~ In My Mailbox~

It’s a chance to share News. A post to recap the past week, showcase books and things we have received and share news about what is coming up for the week on our blog.