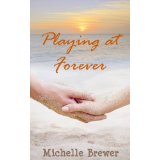 Since I had just finished reading Punished, I was looking for a new book to start on my kindle last night. I read the first chapters of several books and a few more chapters in a couple books, but nothing was really grabbing me. I wanted to just find a book to get lost in for the night. Then, I started Playing at Forever, and I just couldn’t put it down. My husband so kindly asked if I knew what time it was at 3 this morning.
Penelope “Penny” Lang has just been dumped by her husband Kevin, for Gina. Gina is the woman that Penny had hired to help run her restaurant so that she would actually have more time to spend with her husband. Now Penny is stuck trying to run the restaurant of her dreams, The Seaside, with her soon to be ex-husband and the woman he cheated on her with. Penny is upset, but really she’s more concerned about the restaurant.
Penny had been staying with her best friend Amy ever since she had discovered Kevin & Gina in the parking lot of her restaurant one night. Penny was struggling, but making it. Amy decides to walk with her to work one morning, and they stop when they see the cover of a magazine. It’s Tommy. Tommy – Mr. Tall, Dark & Handsome. Tommy Davidson, or Thomson Davis as he was now known, had moved out to L.A. to be an actor, and he had made it. But, before that, he had been Penny’s very best friend in the world. Penny looked at the cover of the tabloid and remembered their last night together. She had finally kissed him. It was just a brief kiss, but one she had never forgotten.
Apparently it was one he hadn’t forgotten either, because he showed up one night while she leaving the restaurant. She didn’t want to let him back in after he’d disappeared these last ten years, but she just couldn’t help it. Kevin takes witness to this, and Gina takes witness to his jealousy. She now wants Penny to buy Kevin out or sell, but Penny is not in the position to do either.
Graham, Tommy’s manager, has a plan, though. Wholesome Penny needs to act like she’s Tommy’s new love interest to help clear up his image and fix his career, and she’ll be compensated enough to buy out her restaurant. This is where the fun all starts. I’m gonna hold out on the ending. I don’t want to completely give it away. I’ll say that there are some fun surprises along the way and plenty of times that you’ll want to pull your hair out!!
Happy Reading,
Alison